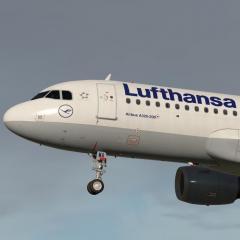 Dear flight simmer here in the forums, News might have spread of some gentlemen accusing us of copying the work of some other, very talented painters. I personally was very surprised and als

Previews of my wip liveries, please head to my profile file section for an overview of all the curretn ones. For support you can either write in this thread or write me a private message and I'll

I will release the Lufthansa OldCOlour Fleet-Pack tomorrow, which will feature every A32A currently active