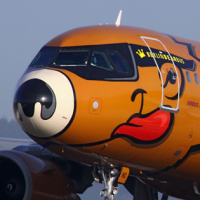 This is a freeware Lua script, which automatically plays the callouts you would hear from the
pilot monitoring (PM) in an Airbus flight deck during takeoff and landing (including rejected
takeoff, go-around and touch-and-go).

What it does:
- The script runs automatically upon loading the FSLabs Airbus (if FSUIPC profiles are set up correctly).
- Upon advancing the thrust levers for takeoff, the PM will open the PERF page on his MCDU, allowing the script to fetch the takeoff speeds.
- The following callouts are included:
# Takeoff: FLEX SET / TOGA SET, 100 KNOTS, VEE ONE, ROTATE, POSITIVE CLIMB, CLIMB SET
# Landing: SPOILERS, REVERSE GREEN, DECEL, 70 KNOTS
# Gear confirmation: GEAR UP, GEAR DOWN
# Flaps confirmation: FLAPS UP, FLAPS 1, FLAPS 2, FLAPS 3, FLAPS FULL
# Special: STOP (rejected takeoff), STAND UP, GO (touch-and-go)
- The script recognizes the phase of flight to play the correct callouts. Multiple legs are possible.

Credits:
- The fetching of the MCDU V-speeds is the work of @Peter Pukhnoy. Huge thanks to him for his contribution to this project.
- The free Lua socket library is made by Diego Nehab. It is available at https://github.com/diegonehab/luasocket .
- Free TTS sounds included in this package are recorded from ttsmp3.com (British English / Brian).
- Included UK real voice pack was recorded by @Nick Kidd. Thank you!

Disclaimer:
This script is free software. It comes without any warranty. Use this at your own risk. I am not responsible for anything you do with it, or for any possible damage that comes out of using it.
You can modify the script for your own personal use, but I ask you to refrain from redistributing it without my permission. Thank You.

I'm VERY SORRY. There was a bad typo in the code of the last version making it unusable. Bad quality control.